This winter, multiple pipeline expansion projects are expected to begin service in the Marcellus Shale.  The expansion projects will increase natural gas takeaway capacity from the Appalachian Basin, where the past two years production has increased significantly.  Focused primarily on trasportation to the New York/New Jersey and Mid-Atlantic regions, these new projects would have a limited benefit for consumers in New England.  Despite the increase in natural gas arriving in the region, price spikes during peak winter demand periods don’t seem to going anywhere.

The expansion projects would add at least 3.5 billion cubic feet per day (Bcf/d) of additional capacity to New York/New Jersey and Mid-Atlantic markets, and have expected in-service dates between 2013 and 2015.  More than 2.0 Bcf/d of expansions are expected to be in service for this winter alone.  The New York-New jersey Expansion project on a portion of Spectra Energy’s Texas Eastern Transmission Company pipeline from Linden, New Jersey to Manhattan, New York, is the largest of these projects at 0.78 Bcf/d.  The Federal Energy Regulatory Agency (FERC) announced the start date for initial service of these expansions on October 17, 2013.

Despite the approval by FERC for the initial service to begin, consumers in New England would not see a significant benefit from the expansions until 2016.

The Algonquin Gas Transmission (AGT) pipeline, which takes gas from the Marcellus and other sources to consumers in New England, has traditionally operated at near full capacity during periods of peak winter demand.  The next planned expansion on AGT is the Algonquin Incremental Market (AIM) project which would enable the pipeline to flow north an additional 0.42 Bcf/d of gas received at its interconnect with Millennium Pipeline in Ramapo, New York.  The target in-service date for the AIM Project is November 1, 2016. – Mike Ford, Today in Energy, Marcellus natural gas pipeline project to primarily benefit New York and New Jersey, EIA, Oct. 30, 2013

Market Prices of natural gas (see graph from EIA) reflect the difference in construction activity for New York and New England Markets.  When compared to the nationwide benchmark price for gas purchased (Henry Hub in Erath, Louisana), monthly forward prices for gas purchased at AGT continue to spike in winter months.  However, the forward price at the Transco Zone 6-New York (TZZ6-NY) trading hub is similar to the Henry Hub forward price. 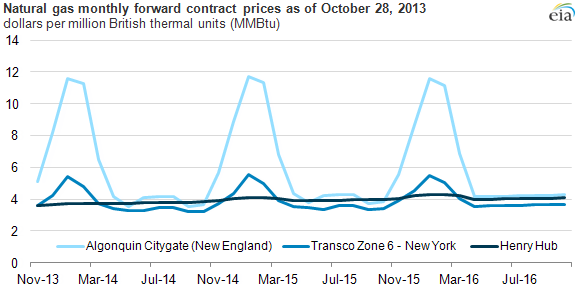 Several additional projects are expected to increase the takeaway capacity of natural gas out of Marcellus Shale this winter to consumers in New York/New Jersey and Mid-Atlantic regions, but these expansion projects experienced delays that set back the service dates.

A Coyote, A Werewolf & A Faerie Walk Into a Bar…